As I mulled over my notes and reflected on the theoretical aspects of the project, I also searched for inspiration in the world around me. While browsing a local curiosities shop one day, my predilection for expressive, open-ended games nudged me toward a quirky deck of cards called Anywhere — A Travel Guide. Created by design student Magda Lipka Falck, Anywhere offers a stack of whimsical prompts that recall the conceptual scores of the Fluxus movement (Friedman, Higgins & Proctor 2011):

‘Take a walk with a wish in your pocket. Then leave it somewhere in the city.’
‘Collect shadows. Notice the shapes, colours, directions.’
‘Find a bridge. Cross it. If you can’t find one — make one’ (Falck 2014).

It’s a charming project, beautifully designed, and when I first opened the box and began flipping through the cards I felt simultaneously excited and despondent. It hewed so closely to my own ideas about play and the subjective city that it almost seemed to moot the point of any further work on my own game. But despite its charms, Anywhere shares with Fluxus (and with Neurocam) a defining aspect that I had decided from the outset would not shape The Parallaxis: the assignment. For much like the work of fiction, the assignment does not need you. It is complete within itself, a fully realised concept that conveys authorship rather than invitation. Indeed, many of famed Fluxus artist Yoko Ono’s instructional works are purely conceptual, such as her autumn 1963 City Piece: ‘Step in all the puddles in the city’ (2000 p. 50).

And yet I was a bit reluctant to dismiss the assignment altogether, as I was in the midst of completing one myself and had been finding it quite enjoyable. A photography project was making the rounds on Facebook and a friend had invited me to participate: take a black and white photo every day for five days, and share the results.

How perfect, I had thought when first invited — an excuse to go out wandering with my camera. As it happened I wandered no further than my own apartment on the first day, but this would prove to be a fitting start.

Over the next four days I cataloged a series of unassuming moments that had nonetheless given me brief pause. A festive scatter of triangles painted on the pavement; the ornate roofline of an old building criss-crossed with catenary; a soaring inner-city gum tree; summer cloud formations patterned through a screen door.

Though seemingly inconsequential each of these moments ripples out from its own centre, casting circles that connect the present to the future and the past. What would come next was an evolution and a synthesis of what had come before; of everything that had come before — and which this simple assignment had begun to bring into focus. 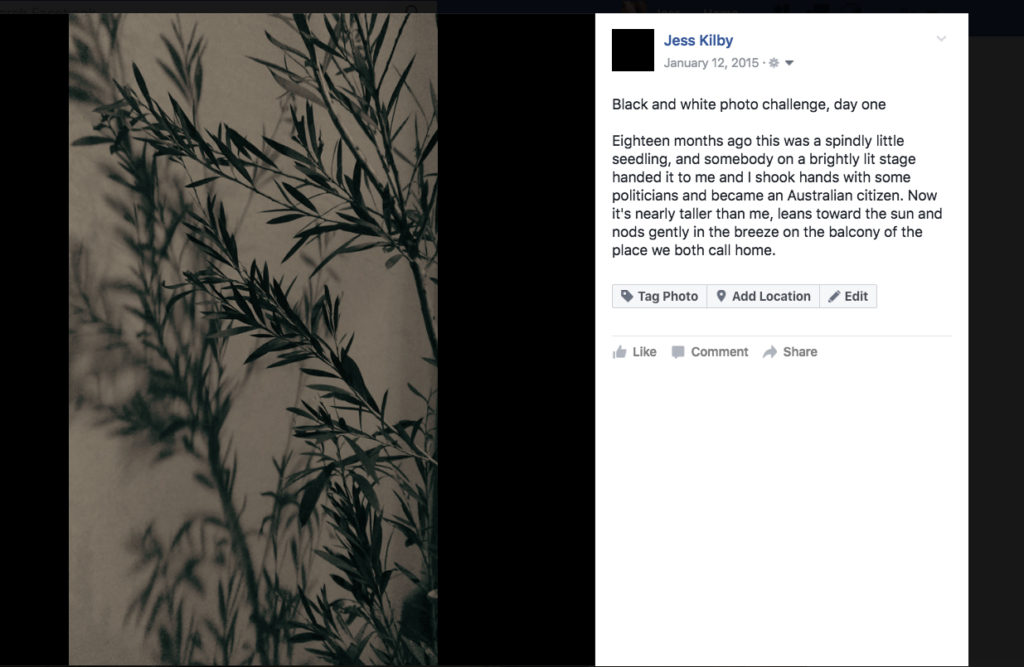